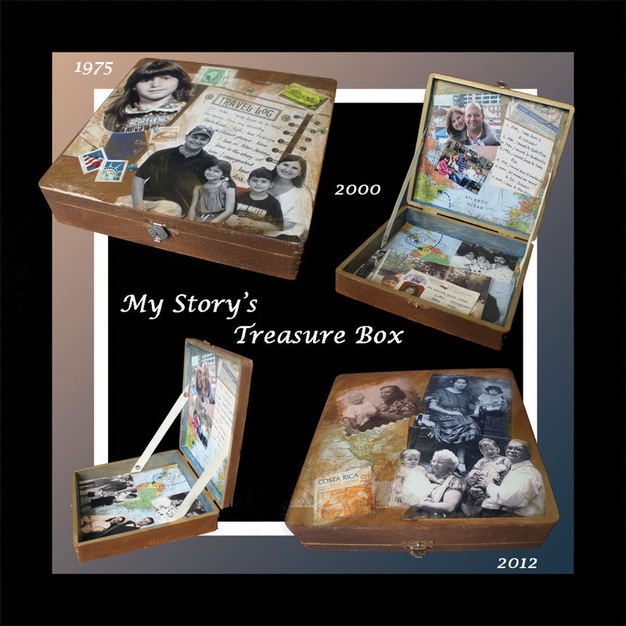 
My name is Ana, and I come from a Costa Rican family. Now I live in New Jersey but here is my story; where I come from and how I came to live in Hackettstown. To do this essay, I interviewed some of my family members and I collected a good amount of pictures. Many of them are real treasures.

Here we go; Where Do I come from? My great great grandparents had come from places like Cuba, Spain and Germany; they all came to Costa Rica at the end of the 18th Century. My great grandparents were all born in Costa Rica and so the following generations until now, my children and their cousins. My mom’s family settled in Atenas, a little town in the southeast mountains of Costa Rica and San José, it’s current capital. My father’s family was from Cartago (the former capital of my country) and San Jose. I’m lucky to have three of my grandparents alive and so many wonderful stories to listen to. From pilots to math teachers and a lawyer, and from farmers, the secretary of the Costa Rican president and a mother of 7 children; they all have made my life rich in stories and family values. I’m the first grandchild from both sides. They spoiled me. I keep great memories of my early years and I can’t do anything else but smile every time I remember them. Now each side of my parents has 18 grandchildren and a few great grandchildren. Indeed, we are a large family and we get to be together from time to time.

My paternal grandfather, Fernándo Robles graduated as an agronomist and in 1965 he went to El Salvador to work assisting coffee plantations. Him, alongside with my grandmother Noemy and their children moved to that little country and lived there for about 15 years. My father went back to Costa Rica to study at UCR, or University of Costa Rica. He followed his dad’s steps and became an agronomist too. He met my mother and got married in 1974. They moved to El Salvador to work and live closer to my dad’s family. That was the first time my mother traveled abroad and I always considered her a very brave woman because of that.

In 1975, I was born in the country of El Salvador, however, I consider myself Costa Rican. Then in 1980, we moved back to Costa Rica due to many political and security issues in the country. There we lived there for about 6 years, until Carlos, my dad, got a new job in another neighbor country, Guatemala. My dad has been working in Guatemala since 1985 to the present. Because of that, we have moved back and forth between the two countries.

In 1998 I met Francisco, my husband, in Guatemala and we got married in January 2,000. To keep up with the tradition of getting married and moving away, my husband got offered to move to Cali-Colombia for a year and we accepted. Later on, his company relocated us to New Jersey. Eleven years have gone by and now I can call New Jersey my home. Both my children, Ana-Laura and Francisco, were born there.

My treasure box contains all these stories in it. I keep all these memories very close to me. They made me who I am.